When I first met Nicolas Berggruen, I was struck by two things. First, he was a multi-billionaire I’d never heard of — the most interesting kind. Second, he didn’t own a home.

A billionaire without a home? This, I figured, was worth a story. My article about Mr. Berggruen in today’s Journal focuses mainly on his investing life and his push toward socially responsible investing. But what interested me most was his unconventional personal life. 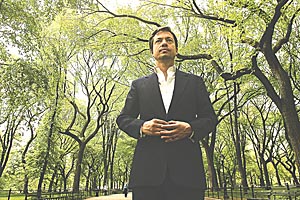 After making his billions, Mr. Berggruen, 46, lost interest in acquiring things: They didn’t satisfy him, and in fact had become something of a burden. So he started paring down his material life, selling off his condo in New York, his mansion in Florida and his only car. He hatched plans to leave his fortune to charity and his art collection to a new museum in Berlin.

For him, wealth is about lasting impact, not stuff.

“Everybody is different and I think that we live in a material world,” he told me. “But for me, possessing things is not that interesting. Living in a grand environment to show myself and others that I have wealth has zero appeal. Whatever I own is temporary, since we’re only here for a short period of time. It’s what we do and produce, it’s our actions, that will last forever. That’s real value.”

When I pressed him on why he no longer got much enjoyment from acquiring more “things,” he said this: “First, I don’t need it. Secondly, maybe in a bizarre kind of way, I don’t want to be dependent on it or have the responsibility. I don’t get that much enjoyment out of saying ‘I own it.’ ”

Mr. Berggruen makes clear that his philosophy is his own, and he has nothing against those who want to enjoy their wealth by having big homes, cars and all the rest. And of course it’s easy for a billionaire to say “money and things aren’t important.”

But his perspective seems to be increasingly common among today’s superwealthy — and even wealthy — who are looking for more lasting meaning in their lives beyond their possessions. I’m not saying they’re right or wrong or that possessions are inferior to other measures of wealth — people should use their wealth however they choose. Yet for all that, Mr. Berggruen’s personal downsizing may be a sign that the voluntary simplicity movement could be moving up the wealth ladder.

View All Books By Timothy Egan